If you’re stuck for healthy eating ideas - or need some help getting started, our dietitians can help!

Check out our specialist dietitians' various healthy recipe ideas and advice on how to achieve a balanced, nutritious diet - along with information about eating well if you have a dietary condition.

Sticking to healthy eating habits is not as hard as many people think. The essential steps are to eat mostly foods derived from plants - including vegetables, fruits, whole grains and legumes (beans, peas, lentils) - and to limit highly processed foods.

Find out more about the trust’s nutrition and dietetics service at: www.hrch.nhs.uk/nutrition-dietetics 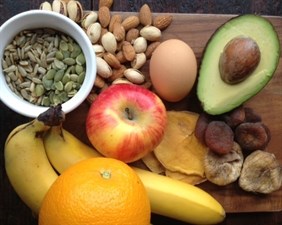 It can be hard to eat healthy at work - particularly when there is a constant supply of chocolate and biscuits. They are in your office, looking at you and almost screaming “eat me, I taste so good!”

“But what else can I have?”, you may ask. Well, there are a variety a delicious and healthy snacks you can keep on your desk, or in the fridge – the good stuff. Just reach for them when you are peckish and your body will thank you for that.

So here you go. A list of healthy snacks for you to have . Start tomorrow, you will be glad you did. No more excuses to reach for that biscuit or cake, unless it is a special occasion, of course. 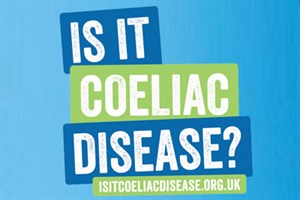 HRCH dietitian Veronica Mitchell writes about the common digestive condition resulting from an adverse reaction to gluten - which affects 1 in every 100 people in the UK.

Gluten has become a dirty word amongst many celebrities, self – styled nutrition gurus and the ever growing clean eating dieters.  However, in those with a real intolerance to gluten, eating gluten has a serious health impact.

This week is the National Coeliac Disease awareness week.  Coeliac disease is an autoimmune disease causing the immune system to react to gluten.  It is known that 1 in a 100 people has coeliac disease.

How do you know if you have coeliac disease?

Symptoms may vary from mild to severe and can include bloating, diarrhoea, nausea, wind, constipation, tiredness, mouth ulcers, hair loss, anaemia, sudden or unexpected weight loss (but not always).  However, some people do not experience any symptoms and coeliac may remain undetected.  The aforementioned symptoms could also present in other conditions such as irritable bowel syndrome.

Testing for coeliac disease includes a blood test and a gut biopsy.  It is important not to remove gluten from your diet while the tests are being carried out to ensure an accurate result.  If you have been diagnosed with coeliac disease, you will need to follow a gluten – free diet for life.

Gluten is a protein found in barley, rye and wheat.  Eating gluten if you have coeliac disease will damage the lining of the small intestines.  This will result in malabsorption of calories, vitamins and minerals.  There are lots of unprocessed naturally gluten free foods such as

If you are concerned about coeliac disease, you could find more information at www.coeliac.org.uk.  If you suspect that you may have coeliac disease talk to your GP about testing for coeliac disease and asked to be referred to a dietitian.

Bowel Cancer Awareness Month takes place throughout April 2017.   Bowel cancer, also known as colorectal cancer affects the large bowel which is made up of the colon and the rectum.  Cancer starts when something goes wrong in the cell and it starts growing uncontrollably to form a tumour. Bowel cancer is the fourth most common cancer in the UK after breast, prostate and lung cancers.  It is also the UK’s second biggest cancer killer due to late diagnosis.

Screening is a way of testing healthy people for early stages of an illness before they get any symptoms.  It aims to detect cancer at an early stage when treatment is more likely to be successful.  In England, Wales and Northern Ireland, people over the age of 60 are invited for screening, whilst in Scotland, screening starts at the age of 50.

Symptoms of bowel cancer can include:

However, all is not lost as over 50% of all bowel cancers could be prevented through lifestyle changes such as:

Practical dietary tips to include more fruits, vegetables and grains into your diet and reduce your risk of bowel cancer: 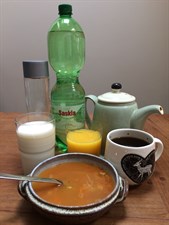 The importance of nutrition and hydration
It is that time of year again when we highlight the need to have good nutrition and to stay well hydrated.  You may wonder why we focus on nutrition and fluids.  It is well documented that over 3 million people in the UK are at risk malnutrition at any one time and the associated cost of malnutrition equates to over £13 billion a year.

The consequence of malnutrition includes:

Some of the best ways to improve nutrition is through:

Less is known about the prevalence of dehydration especially in the elderly.

Poor hydration has a negative impact including:

To improve your hydration, try the following:

If you feel you need assistance with improving your nutrition, ask your GP to refer you to a dietitian. 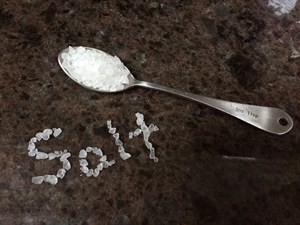 People often ask me if salt is bad for you.  By now you know my principle of “there is no bad food, just bad diets”!

Salt, also known as sodium chloride is made up of two parts, sodium and chlorine.  Sodium is an essential nutrient, but the body is unable to produce it naturally.  It has a role in regulating many bodily functions including the transport of oxygen and nutrients.  It also facilitates other functions such as fluid and acid – base balance.  Salt is found naturally in many foods like meat and vegetables.  It is also used in foods to make it more palatable and as a preservative to extend its shelf life.

The problem is we are consuming too much salt.  In fact we don’t need to add salt to our diet because we could derive all the salt our bodies need from natural sources.  Too much salt in our diet has a negative effect on our health.  It could increase blood pressure and contribute to the risk of stroke and heart disease.  It has also been implicated in increasing the risk of developing osteoporosis, stomach cancer, obesity and kidney problems.

The current recommended daily salt consumption is no more than 6g, which is about one teaspoon of salt.  However, the average daily intake of salt in the UK is about 8.1g, the equivalent of one and a half teaspoon.  About 75% of our salt intake comes from added salt mainly from processed meat, ready meals, soups, ready – made sauces, breads, cereals, and snacks such as crisps, biscuits and salted nuts.

There are several strategies you can employ to reduce your salt intake:

Reading food labels could be a bit of a minefield.  Previously, salt was either labelled as such or as sodium.  From December 2014, all food labels will only list salt.  This would make it easier to see and compare how much salt is contained in food products.  So, how much salt is too much?  Below is a practical guideline you can use when reading labels and using the traffic light system of labelling:

It is important to remember that we don’t often eat foods that are in 100g packages.  So, as a guideline, if you are having ready meals or sandwiches, try to choose those that are less than 1.25g salt per meal.  For individual foods such as soups or sauces, aim for 0.75g salt per serving. 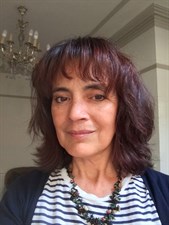 Detox diet for the new year

With a new year upon us, are you inspired to embark on a healthier and more active lifestyle?  Tempted by all the “detox diets” promising to cleanse and help you lose weight?  Do you really need to clear toxic waste from your body and relieve your wallet of your hard earned cash?

With the popularity of celebrity bloggers and nutrition gurus, detoxing or clean eating has recently been the “go to” solution for the health – conscious public.  However, the idea that by fasting, cutting out food groups such as dairy or  wheat, consuming only fruits & vegetables or taking a range of detox solutions, potions or pills is going to rid your body of toxins and help you lose weight is a total nonsense. 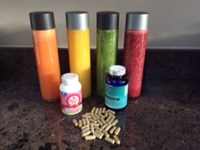 There is no scientific evidence to support the need to detox.  Fortunately, our body has its own well – developed system equipped to detoxify and remove toxins and waste products including alcohol, bacteria, chemicals and digestive by products.  The body’s numerous organs including the skin, gut, liver and kidney constantly work hard to break down and eliminate toxins and internal waste products.

If you wanted to make positive changes to your lifestyle, detoxing is not the answer.  Changing a habit of a lifetime is not easy.  So, it is useful to have a plan.  Start with a SMART goal.

Finally, I recently read an interesting study done in the University College, London that said it takes an average of 66 days for health behaviour to become a habit.  That means repeating the health goals you have set every day for just over 2 months.  So, don’t give up just yet.  Make the habit stick and see what happens!

The importance of a balanced diet

The Eatwell Guide depicts a healthy, balanced diet, which includes:

If consuming foods and drinks high in fat, salt and sugar then have these less often and in small amounts. 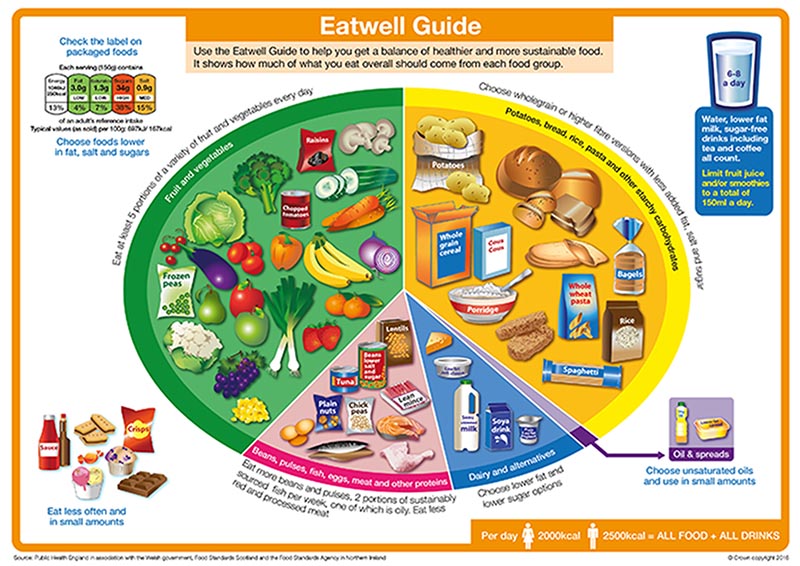 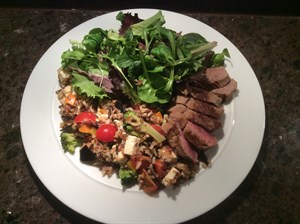 Is there a  particular dietary topic you would like to see covered by one of our dietitians?  Or maybe you're stuck finding healthy recipes for a particular type of cuisine.  Email communications@hrch.nhs.uk and let us know and we will see what we can do!